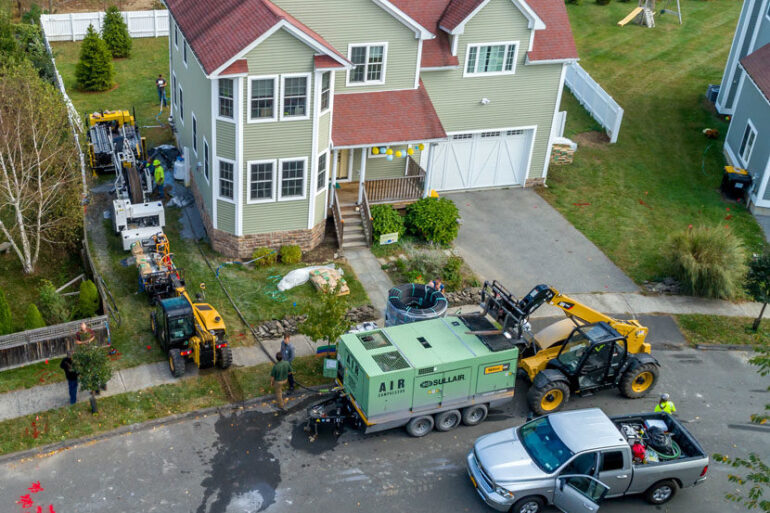 That number is not larger in part because replacing heating and cooling systems often has been a logistical headache as well as expensive.

With innovation, there’s “a large growth potential,” says Jasmin Raymond, a professor at Canada’s Institut National de la Recherche Scientifique (INRS), who has a specialty in geothermics and is the Scientific leader of the Geothermal Open Laboratory. “Solving such challenge will make geothermal more and more mainstream.”

That’s where Dandelion Energy comes in. The start-up’s goal is to be cheaper and more user friendly than the competition.

“None of the players in the U.S. had the capital or resources to really invest in pushing the technology forward, really productizing it and making it into a great customer experience — simple and easy and inexpensive,” Hannun tells CNBC Make It.

What Hannun and her co-founders created at X improved the drilling technology necessary for doing home retrofits. (Dandelion’s co-founders own the patents in exchange for Google being a shareholder.) As a result, Dandelion has smaller drilling equipment, which allows the company to take on projects that would be impossible with larger, conventional rigs.

“About half of the customers we serve today…their yards are too small and the conventional rig simply can’t access the yard,” Hannun says. Dandelion’s rig is also less disruptive and messy than conventional rigs, “which is very important for drilling in suburban neighborhoods,” she says.

To keep costs down, Dandelion Energy is also vertically integrated, meaning all parts of an installation are completed by Dandelion, from manufacturing its own heat pumps to installation (instead of relying on sub-contractors).

A typical Dandelion installation costs between $18,000 and $25,000 for an average sized home of about 2,000 square feet. (Direct comparisons are hard, but multiple homes of approximately 2,000 square feet paid about $50,000 for heat pump retrofits in Massachusetts between 2015 and 2019, according to public data, though that total is before federal tax credits were factored in.)

Dandelion, which operates in New York and Connecticut currently, allows its customers to pay for installation in installments, starting at $150 a month. The company also walks homeowners through the process of applying for federal and state-level tax incentives, which can “save Dandelion customers thousands of dollars,” the company’s website says.

However, recurring fuel costs are eliminated with a geothermal heat pump. The U.S. Energy Information Administration estimates fuel can average between $600 to $1,200 per winter, depending on the kind of fuel a customer uses.

“As a start-up…the single family home in upstate New York is an easier project to sell and manage and deliver on than a giant apartment building in New York City,” Hannun says. But as Dandelion grows, so will its menu.